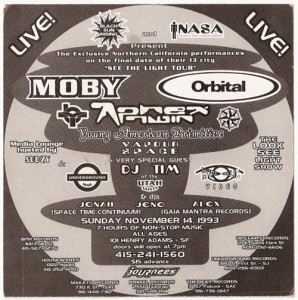 I was insanely fortunate to see NASA’s See the Light Tour with Aphex Twin, Orbital, Vapourspace, Young American Primative, Moby, Djs Jonah (spacetime continuum), Dj Tim (Utah Saints, Jeno and Dj Alex… This was just as techno was starting to break across North America, with this being the first proper tour of heavy weight rave acts to spread the good word. Seeing it was a total fluke… a rare case of right time, right place…

I stumbled across an archive online where was found a recording of Aphex Twin’s set that night, so I thought I should archive it here… would love to hear the other sets if they’re out there somewhere… Hearing Orbital play Halcyon and Chime that night from the top of the 4 story atrium the show was in, made time stop for a while. That, hearing Gravitational Arch of 10 for the first time, played live by Vapourspace, and the entirety of the insanity that was those early 90s Aphex Twin live sets… 3 seminal techno moments for myself, all in one night. head a’splode!

Phil Western, Robert Shea and Christopher Flett, three major influences in the Vancouver/Victoria early rave days were also there… Robert was smart enough to bring his video camera which caught the following: